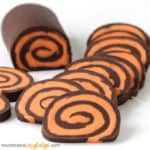 Layers of chocolate fudge and orange-colored fudge are rolled together and cut into pinwheels.